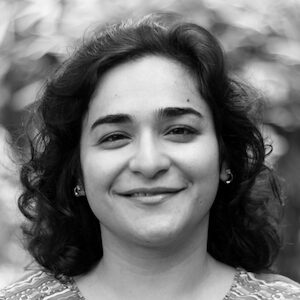 Sumetee is a member of the PlanAdapt Coordination Hub, a PlanAdapt Fellow and an associated Senior Researcher. She is based in Cape Town, South Africa.

Sumetee has more than a decade’s experience in policy advocacy on climate change adaptation, ecosystems-based solutions and sustainable development, and is currently based in Cape Town. She collaborates with multiple institutions to understand the role of Nature-based Solutions, in reducing social-ecological vulnerability, to climate change impacts in the Global South. She is part of a working group dedicated to reviewing international examples of Urban Ecosystems-Based Adaptation, convened by PlanAdapt, an independent global network-based organisation, and the International Union for the Conservation of Nature (IUCN), with members from the climate, environment and nature-conservation practitioner communities. She has contributed to books on urban resilience planning, climate justice, and transformative climate adaptation, with a Global South focus, through her association with the Indian Institute for Human Settlements (IIHS). Sumetee’s writing and policy interests lie at the confluence of transformative climate action, urban resilience and nature conservation, with an emphasis on justice and local empowerment.

Sumetee helped build the IIHS team for ASSAR (Adaptation at Scale in Semi-Arid Regions) consortium, part of the CARIAA Research Programme (Collaborative Adaptation Research Initiative in Africa and Asia). This involved building an interdisciplinary team, reviewing knowledge outputs and representing ASSAR at various knowledge platforms, national conferences and international events. Sumetee has developed and taught programmes on Nature-based Solutions; Climate Change and Disaster Risk Reduction; Ecosystems-based Adaptation; and Sustainable Design. She has lectured at Indian and South African universities and colleges, most recently at the Cape Peninsula University of Technology. Sumetee has also written technical reports on peak oil, energy access, corporate sustainability and climate change policy with the Sustainability Institute, Stellenbosch, South Africa. She has contributed photo-essays and scientific blogs to The Wire, the India Water Portal, and The Nature of Cities, reflecting on the practical role of nature and ecosystem services in the normative goal of urban resilience. As a mother, she has great interest in how an appreciation for the environment and its interactions with development, is inculcated early in the education of learners, and sustained.

Sumetee holds a PhD in Public Development and Management from the School of Public Leadership, University of Stellenbosch (US), South Africa (Scholarship from the Centre for Renewable and Sustainable Energy Studies, US). She also holds a Master of Science degree in Project Management (Best Student Award) by University of Cape Town (UCT), South Africa and a Bachelor of Architecture (First Class) degree, School of Planning and Architecture, New Delhi, India.

Sumetee led PlanAdapt’s work in the following projects and initiatives:

Sumetee contributed to PlanAdapt’s work in the following projects and initiatives: