Urban floods are becoming more common as a result of increasing urbanisation, climate change, and poor urban planning. Supported by CDKN, five municipalities in Accra, Ghana, are working together with the University of Ghana to address flood risk, with a special focus on the use of Ecosystem-based Adaptation (EbA) approaches. A new report by PlanAdapt explores the findings from this work and lessons from four African cities.

Which Options Are There To Manage Urban Flooding?

Flooding poses a significant threat to cities in the global South, due to a combination of factors including unplanned city extensions, prevalent poverty and low adaptive capacity. Depending on location, physical characteristics, and climate change risk, urban areas can be affected by a number of flooding typologies. Rapid urbanisation means cities have a reduced ability to learn from mistakes and build adaptive capacity. Nevertheless, there is a broad range of interventions and measures to reduce flood risk at different scales.

The capital city of Ghana, Accra, and its peri-urban areas, have always suffered from annual floods during the rainy seasons. Supported by CDKN, five Accra municipalities are working together with the University of Ghana to address flood risk, with a special focus on the use of nature-based approaches. Over the last two years, local officials have met in two events and have had on-going engagements to learn from each other and coordinate their flood-management approaches. As part of this initiative to support Accra-based officials, CDKN supported a new report by PlanAdapt, who undertook a comparative study looking at four African cities and their approaches to flood risk, their use of Ecosystem-based Adaptation (EbA) and what lessons they hold for Accra and other cities.

Flooding is often considered the most devastating natural hazard to manage through disaster risk reduction (DRR) strategies. Integrated Flood Risk Management (IFRM) describes a broader approach, entailing a combination of structural as well as non-structural elements, which improves resilience to flood disasters. The report, Ecosystem-based Flood Management: A comparative study report of Cape Town and Durban (South Africa), Nairobi and Mombasa (Kenya), compiled by PlanAdapt, highlights the use of IFRM approaches such as Ecosystem-based Adaptation (EbA) and Nature-based Solutions (NbS).

Ecosystem-based approaches aim to restore and enhance the natural dynamics of ecosystems to buffer the adverse impacts of climate change. Additionally, these approaches can provide many environmental, socioeconomic, and biodiversity benefits for flood risk management solutions. Ecosystem-based approaches such as restoration of rivers, mangroves and sand dunes, and protection of kelp beds and wetlands, have demonstrated wider benefits for communities through improvements to public health, the protection of livelihoods and creation of new income-generating opportunities.

The PlanAdapt report showcases good practices in flood management approaches by the cities of Cape Town, Durban, Nairobi and Mombasa. Overall, the report is an initial output aimed at fostering valuable exchange and peer-learning between Accra-based District and Municipal officials and cities in South Africa and Kenya. The report provides recommendations from lessons learned from the other countries and hopefully lays the groundwork for further peer-learning in the future as part of potential CDKN activities.

While each city in South Africa and Kenya has its own political, social and cultural context, they find themselves facing similar challenges when it comes to flooding. In both cases, rapid urbanisation leads to an increase in impervious surfaces and areas with a lack of solid waste management or insufficient drainage systems. Informal settlements located in flood-prone areas are particularly affected. These challenges are exacerbated further by climate change impacts such as heavy rainfall and droughts.

Bearing these similarities in mind, it is useful to understand how each of the selected cities responds to its particular circumstances with a combination of structural (EbA and grey) and non-structural solutions. Collaborative modes of governance that embrace a whole-of-society perspective appear to be most effective.

Is Traditional Grey Infrastructure Still the Way To Go About Urban Flood Management?

Flood and water governance require the involvement of a wide range of stakeholders and institutions as well as intra- and cross-organisational collaboration, sometimes over a long period of time. For this reason, it is vital that practitioners and officials become informants to the process of knowledge production. The role of civil society organisations and NGOs in affected communities is also imperative, to understand flood management from a local perspective.

The report found that while South African cities have demonstrated maturity in their response to climate change across policy, planning and action frameworks, it is clear that the cities of Mombasa and Nairobi in Kenya are still in the process of climate-proofing their urban planning, particularly for flood management.

The reason for Kenya’s more nascent response to climate change impacts at the city level was expanded upon in interviews with Kenyan city officials. PlanAdapt found that strong traditional thinking and urban planning practices were prevalent, with a bias towards grey approaches to flood management. This traditional, grey infrastructure response to climate adaptation has tended to underestimate the value of learning and collaborations between city authorities and non-state actors – a key enabling aspect of mainstreaming NbS approaches in urban planning for both cities.

As seen in the case of South Africa, a strong guiding role of the national government may help local governments take ownership of translating national policies for  EbA into local mandates on EbA, including DRR and climate protection. This being said, challenges still remain for the local government to fully respond to flooding due to land ownership issues as some areas are beyond their mandate. This matter is complicated further due to the fact that urban flooding is a localised event, but is experienced unequally by residents of cities, based on their location in a city. In most cases, research indicates that more exposed and vulnerable poor neighbourhoods, particularly in informal settlements, face greater impacts. 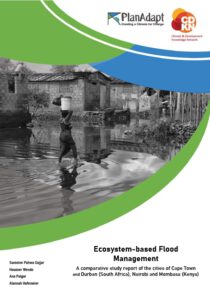 Finally, it is clear that ecosystem- and community-based approaches offer a vehicle to address multiple challenges faced within informal settlements. Getting stakeholders on board, by identifying champions and communicating the co-benefits of EbA, through, for example, improved health, has proved beneficial. Furthermore, incorporation of social principles in the design and implementation of EbA for flood management is highly recommended, given the vulnerability of particular social groups to the impacts of climate-exacerbated urban floods.

Read the full report to learn more about the wide breadth of ecosystem and nature-based solutions suitable for the scale of intervention needed to address flooding.