What Does Climate Justice Mean for Youth and Women Right’s Organisations in Africa, Middle East and Latin America? (Part 1)

Climate justice is at the center of many organisation’s programming and approaches these days. However, there is still widespread uncertainty about how to integrate climate justice-related objectives and principles into programming and advocacy work.  As a response, Oxfam Quebec and PlanAdapt have partnered to provide youth and women right’s organisations in Africa, Middle East and Latin America with more guidance on what this new mantra, i.e. climate justice, could mean for their work. PlanAdapt’s team was comprised of Martin Rokitzki, Clara Malcolm, Till Groth and Alannah Hofemeier.

Following consultations with many youth and women right’s organisations that participate in the Equality in Action Volunteer Cooperation Program, we identified and co-developed a wide range of entry points to integrate climate justice concerns into programming, of which we highlight a non-comprehensive list of nine action areas and entry points. They serve as references and starting points to reflect aspects of climate justice in the work around women and youth rights from a wide range of regions and countries. The aim is to stimulate a joint and collective learning effort towards more climate justice:

1.    Labour and Land Rights in a Just Energy Transition

A transition to a low-carbon economy requires investment and shifts towards clean technologies in energy generation and consumption. This will be a key activity to curb GHG emissions of future economies. The development and the adoption of some clean energy technologies, like electric cars, encompass raw material, such as lithium for batteries, sourced in countries of the Global South. The mining or exploitation of these raw materials is frequently related to the violation of indigenous land rights and labour rights of mining workers (e.g. McKie, The Guardian, January 2021). For example, if land is converted for bioenergy (bio-diesel or bio-gas) and solar energy production as low-carbon energy solutions, unjust transactions, processes of forced displacement of those inhabiting and working those lands, as well as dispossessions resulting in disadvantages of poor landholders or land users, often in patriarchal land governance systems, have regularly been encountered.

Negative climate impacts on the ‘health’ of natural resources and ecosystems, such as land, water, forests, biodiversity, and fish stocks, increase the pressure and the competition around their productive use. The productivity and hence livelihoods income derived from economic activities in the primary sectors (i.e. agriculture, forestry, fishery) is diminishing due to droughts, floods, or other climate-related shocks. 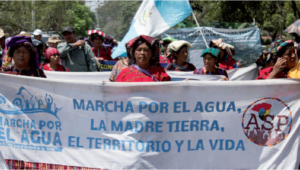 Access and use rights of disproportionately impacted population groups relying on these natural resources should be protected and secured. Supporting community land and resource users through increasing the agency of these marginalised groups and their capacity in asserting and defending their rights, as well as ensuring their voices are heard, will be vital. This includes advocating for policies and decisions that underpin adaptive capacities, such as land and water rights. In addition, their rights in mitigation-focused activities such as forest protection and management (i.e. carbon sinks) should be strengthened.

Large-scale funding for climate action is already flowing, but it is not adequate for the scale of the problem. Through a climate justice lens in climate action finance, additional finance would be committed and deployed, supporting grassroots-led solutions in particular. To advance solutions for climate change mitigation and adaptation, more public finance and simplified mechanisms of accessing it should be used to support sub-national actors such as community-based organisations of indigenous peoples, smallholder farmers, and women.

While the landscape of instruments for carbon (e.g. credit markets) and adaptation finance (e.g. insurance, risk pooling, sovereign risk transfer) is growing fast, there is a need to develop safeguards and mechanisms that guarantee the participation of marginalised societal groups. This is essential to ensure that solutions reach the local level, especially women and youth organizations. Strengthening their participation in ongoing discussions on loss and damage, as well as climate finance through international climate funds such as the Green Climate Fund or the Adaptation Fund is key to securing just climate adaptation. 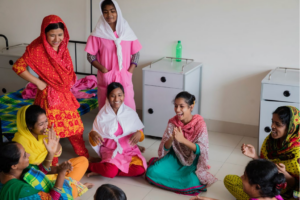 Climate change is a key reason for the increase in displacement and is putting many millions more at the same risk soon. Recent numbers by the World Bank (Groundswell Report on Climate Migration) indicate that more than 200 million people are likely to be pushed to leave their homes by 2050. These people are particularly vulnerable to the effects of the climate crisis as many displaced people live in fragile environments and/or climate change hot spots. The increase in population in these fragile environments leads to further environmental deterioration, which further aggravates the impacts of climate change.

Women displaced by climate-related disasters often face increased protection risks such as sexual and gender-based violence (SGBV), exploitation, and trafficking. Limited access to healthcare can also impede women’s access to life-saving health services, including reproductive and mental health services. Displaced women’s adaptive capacities are often limited due to socio-cultural norms, restricted livelihood options, lack of access to formalized safety nets, and fewer possibilities to benefit from technologies and information. Other impacts may include increased hardship due to their lack of financial assets and limited rights to land and property. When women lack the resources and freedom to move, they may become trapped in areas where climate and disaster risks are high. Transgender, intersex, and non-binary people may also be more exposed to adverse displacement outcomes, particularly regarding access to adequate healthcare and protection.

Read also the second part of this blog: What Does Climate Justice Mean for Youth and Women Right’s Organisations in Africa, Middle East and Latin America? (Part 2)