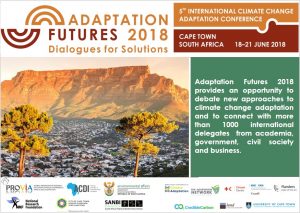 How are Adaptation Measures Identified, Selected, Appraised and Compared in the Caribbean Region?

PlanAdapt participated in the Adaptation Futures 2018 Conference that was held in Cape Town, South Africa in June 2018. Our Managing Director, Martin Rokitzki, presented, in collaboration with Climate Analytics, the findings of a review of approaches to identify, appraise and prioritise adaptation measures in the Caribbean Region. The study was part of the German ICI-funded IMPACT project and arose from the recognition that adaptation needs are strongly felt and frequently reported on in many Least Developed Countries (LDCs) and Small Island Developing States (SIDS), such as the SIDS in the Caribbean Region. However, the understanding of how the recognition and the assessments of climate risks and vulnerabilities are used and reflected in the identification and selection of the ‘right’ adaptation responses remains largely under-researched.

What role do the findings of climate impact and vulnerability assessments play in these decision-making processes? What scientific tools and techniques are used to support it? What criteria are used to support these decisions – only costs and benefits or also other considerations? How are future climate risks and related uncertainty, avoided losses or limits of adaptation being considered in these decisions? These questions comprise the core of the study, scrutinising both economic and non-economic decision-making support tools for adaptation in LDCs and SIDS that were used for adaptation planning (covering a funding volume of more than 900 million USD equivalent) in over 15 Caribbean states since 2010. 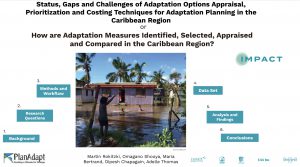 The review was motivated by findings of recent research projects, such as ECONADAPT and MEDIATION, which concluded that approaches to adaptation have shifted from scenario-based impact assessment frameworks focusing on physical climate impacts towards policy-focused approaches that embed responses to expected climate impacts into existing socio-economic pathways and contexts. Many of these studies, however, focused on Europe and other more developed parts of the world.

The study also aimed to fill knowledge gaps by focusing on the following aspects of adaptation decision-making techniques, which have been overlooked in previous studies:

This review is envisaged to contribute towards the improved selection and application of appraisal, prioritisation and costing methods by synthesising the current application status and identifying the gaps and challenges in view of their effective application. Moreover, the findings of this review will assist our researchers with providing methodological guidance to planners, practitioners and policy-makers as to how best they can identify and select appropriate actions to prepare their countries (at both local and national level) for future climate change impacts. Please find more insights and results under components 5 and 6 of the presentation.

3 thoughts on “How are Adaptation Measures Identified, Selected, Appraised and Compared in the Caribbean Region?”