Ecosystem-based adaptation (EbA) includes a broad set of approaches to adapt to climate change, that focus on the management of ecosystems and their services to reduce the vulnerability of human communities. EbA has gained popularity as an approach to climate adaptation, and a wide body of evidence for EbA across the spectrum of green-grey approaches has been generated. However, few of these examples are in urban contexts, and of those, the majority are concentrated in the Global North. Robust case studies of EbA that have been developed with the specific socio-political contexts of cities in the Global South in mind are few and far between.

In recognition of this, and to mark World Cities Day on 30 October, the IUCN’s Friends of Ecosystem-based Adaptation (FEBA) Urban EbA Working Group, PlanAdapt, and the Green-Gray Community of Practice co-hosted a webinar to showcase examples of urban EbA in the Global South. The case studies presented were selected among initiative submitted to the on-going Working Group survey (live until 30 Nov. 2020) 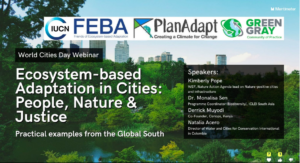 Case studies from India, Colombia, and Kenya, highlighted the potential for mainstreaming of EbA approaches as a cornerstone of climate adaptation in urban contexts.

Natalia Acero, Director of Water and Cities at Conservation International in Colombia, presented work illustrating the impact that connecting the natural, peri-urban, and urban areas of Bogota had on reducing the city’s vulnerability to flooding. Through garbage collection, replanting native vegetation, removing invasive vegetation, engaging the community and raising awareness, Conservation International increased the natural connectivity of the city with creeks originating from the surrounding Andean highlands. This resulted in clean water provision, reduced the strain on sewage systems and reduced vulnerability to flooding. One observed social co-benefit of the project was the reduction of violent crime through the restoration of creek areas, by providing rehabilitation and livelihood creation for young men by training them as tour guides for the area. Acero emphasized that EbA and restoration projects in rural, peri-urban, and urban areas all need to focus on the social transition, including the impact on social networks: “Restoration has been giving a lot of results in terms of biodiversity, it gives a lot of co-benefits, but ultimately it is about social restoration.”

Dr. Monalisa Sen, Programme Coordinator (Biodiversity) at ICLEI-Local Governments for Sustainability, South Asia, presented three case studies from across various cities in India. Sen shared practical examples to show how bringing together rural and urban communities’ knowledge is key to the design and successful management of urban and natural assets. Further, Sen shared that focusing on awareness generation is essential to success in implementing EbA. In Kochi, the specific measures involved the development of a pollinator and herbal garden, mangrove plantation and canal revival. Another example in Solapur involved the rejuvenation of Ekrukh Lake through constructed wetlands. These measures in Kochi and Solapur served to increase the pollinator base, support food networks and connect city dwellers to nature. In the latter case, they also provided a functioning low-cost water treatment system while strengthening community resilience to flooding.

Derrick Muyodi, co-founder of Ceriops Environmental Research Organisation in Mombasa, Kenya, presented a case study on mangrove restoration in urban and peri-urban coastal areas. Muyodi highlighted many of the threats to mangroves including rapid urban development, illegal logging driven by demand for wood, urban pollution and rapid industrialization. Muyodi emphasized the need for urgent action and including community and stakeholder participation. To address this challenge, the project established mangrove plantations with the communities bordering the mangrove forests and provided terrestrial trees for more residential neighbourhoods. The project engaged youth, women, and inter-community groups and learning institutions in project implementation.

The keynote speaker, Kimberly Pope, Nature Action Agenda Lead on Nature-Positive Cities and Infrastructure at the World Economic Forum, stressed that it is crucial to have a nature positive transformation of our cities, especially in the wake of COVID-19. Pope referred to the Nature Risk Rising report, which captures alarming figures: 85% of wetlands have been destroyed globally and two-thirds of the global population relies upon sanitation that increases community health risk. Connecting with previous presentations, the report suggests urban planning solutions such as compact and nature-positive built environments, and nature as infrastructure. The cases captured in the Urban EbA survey aim to capture the detail (biophysical and social aspects) of such urban solutions. Pope emphasized: “We must use this moment to reimagine cities all over the world to make them greener and more inclusive.” 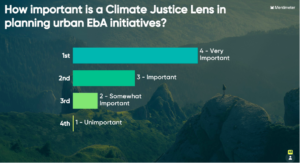 Participation was key in this World Cities Day webinar: over 100 attendees tuned in from over 22 countries, representing governments, international organisations, research institutions, civil society organizations, and the private sector. Three key, inter-linked areas of agreement could be discerned through virtual participation by attendees:

As we receive further responses to the urban EbA survey, we aim to: 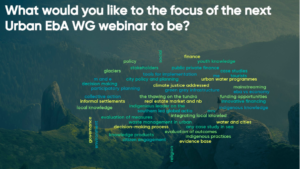 Do you have examples of urban EbA in the Global South to share?  Please complete this short survey (available in English, French, Spanish and Portuguese). We are looking for the "nuts and bolts" of EbA planning and implementation and are interested both in successes and failures. Open until 30 November 2020 only!