PlanAdapt > Latest News / Blog > Climate Impact Assessments > What Does the Recent IPCC Special Report on the Impacts of Global Warming of 1.5 °C Mean for Adaptation Policy and Practice? 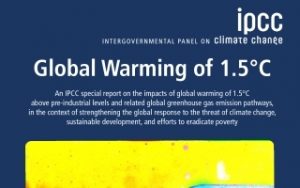 What Does the Recent IPCC Special Report on the Impacts of Global Warming of 1.5 °C Mean for Upcoming Adaptation Policy and Practice?

The eagerly awaited Special Report on 1.5C Global Warming by the Intergovernmental Panel on Climate Change (IPCC) has been launched on 12 October 2018. The core message in terms of adaptation is that fast and effective mitigation of more Greenhouse Gas (GHG) emissions is the best way to adapt, simply by reducing the need for adaptation. But beyond the powerful ‘mitigation-focused’ arguments of the report and the strong call for increased and accelerated efforts to reduce GHG emissions, are there lessons to draw from this report for adaptation policy and practice?

In general – and, perhaps, unsurprisingly – the potential impacts of global warming “for natural and human systems are higher for global warming of 1.5C than at present, but lower than at 2C”, the report says. The risks are also greater if global temperatures overshoot 1.5C and come back down rather than if warming “gradually stabilises at 1.5C”.

Chapter 3  aims at determining the trends of impacts across a large number of natural and human systems and sub-systems (see figure 1). Furthermore, the five ‘Reasons for Concern’ (RFC) were assessed in view of the lines of evidence  since the fifth IPCC assessment report (AR5) and it was found that the assessed levels of risk increased for four of the five RFCs for global warming levels of up to 2°C. Critical thresholds of 3 of 5 RFCs (unique and threatened systems, such as coral reefs or Arctic sea ice; extreme weather events; and distribution of impacts) lie, with high confidence, between 1.5°C and 2°C global warming.

Apart from providing a strong set of arguments for the fact, that the difference between 1.5°C and 2.0°C matters in terms of impacts, the authors indicate tipping points and irreversibilities for change processes in various natural systems – an ice sheet cannot un-collapse or an extinct species be brought back to life. These parts of the report will certainly better inform investments and policy-making to focus on systems that require adaptation measures more urgently than others.

However, the (global impact) model-based findings can’t do away with the issues of uncertainty, low resolution and a plethora of ‘hidden’ assumptions that traditionally hamper their utility in the adaptation practice sphere. The models still mostly lack the representation of a scientifically sound estimation of vulnerability and adaptive capacity, and even adaptive measures at all. That strongly reduces the utility of information such as the one in table 5.1 (a comparison of sustainable development implications of avoided impacts between 1.5°C and 2°C global warming) due to a lack of explanatory value. Less impact is solely explained as a result of less warming, and lacks evidence on whether an improved level of adaptive capacity can equally or even more effectively lead to avoided impact.

Will the world be able to adapt to 1.5C and beyond, and how?

The report finds that, in general, – and again fairly unsurprisingly – the need for adaptation to climate change will be lower at 1.5C than 2C. However, it warns that, even if global warming is limited to 1.5C, it will not be possible to prepare for all of the impacts of climate change.

Chapter 4 (focusing on options for a transition to 1.5°C-consistent pathways and adaptation to warming of 1.5°C) and chapter 5 (analysing the compatibility of mitigation, adaptation and sustainable development goals) of the report remain relatively weak in assessing the feasibility (e.g. table 4.10 and 4.12) or the potential (e.g. table 3.5) of adaptation options to the projected impacts of 1.5°C warming. They offer lists and categories of adaptation options that have been discussed and presented in the literature, but literature is scarce on the expected impacts of future adaptation measures on sustainable development specific to warming experiences of 1.5°C.  In particular, the interrelations between different risks and the six feasibility dimensions (economic, technological, institutional, socio-cultural, environmental, geophysical) remain mostly unexplored and not well understood, while a lot of practitioners have found in real-world settings that only the interplay and the synergies of all these dimensions will determine the success of adaptation.

Despite the observable desire to provide an overview of possible adaptation options and an assessment of their potential effectiveness, limitations are still significant and science was not yet able to shed more robust light on important core questions of effective adaptation. Recognising these limitations, the authors constitute that adaptation as well as ‘losses and damages is context-dependent and often requires place-based research into what people value and consider worth protecting. and continue by saying that assessments of non-material and intangible losses are particularly challenging, such as loss of sense of place, belonging, identity, and damage to emotional and mental well-being.

It is further highlighted, that ‘besides gaps in the literature around crucial adaptation questions on the transition to a 1.5°C world, there is inadequate current literature to undertake a spatially differentiated assessment. There are also limited baselines for exposure, vulnerability and risk to help policy and implementation prioritization. Hence, the compiled results can at best provide a broad framework to inform policymaking. Given the bottom-up nature of most adaptation implementation evidence, care needs to be taken in generalizing these findings.’

In view of adaptation economics, the summary for policymakers says that ‘the total costs associated with adapting to global warming of 1.5C are difficult to quantify and compare with 2C’. This is largely due to gaps in the scientific literature, the report authors say.

Being a hopefully ground-shaking input to enhanced mitigation ambitions, the report has only limited significance for adaptation policy and practice. Two key challenges for decision-making in adaptation persist:

Despite these shortcomings, it is important to highlight that the report contains a clear statement towards a holistic consideration of adaptation, in other words, adaptation requires way more than just technological and infrastructure-based fixes by giving serious attention to power and inequality issues.