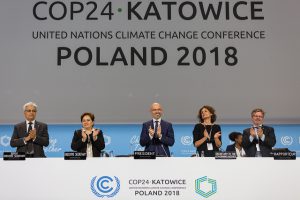 Outcomes of COP24 – Adaptation and Loss and Damage

The 24th Conference of Parties of the UNFCCC was held in Katowice, Poland, in December 2018. Overall, the meeting was expected to further animate the Paris Agreement by adopting the detailed rules for its implementation. PlanAdapt was in Katowice and followed the negotiations and discussions about adaptation and loss and damage during the COP24. So, what have the outcomes been in this respect?

A key concern for developing countries has been to ensure that adaptation is given as much importance as mitigation (along with means of implementation) in the climate negotiations. Hence, for instance, the push for adaptation communications and the inclusion of adaptation elements in the NDCs. However, while the rulebook contains a fair amount of text on the adaptation components the Paris Agreement, it lacks the granularity and specificity of the rules for mitigation. The focus is still very much on “take it or leave it” guidance on reporting; seeking metrics to measure adaptation action; timidly considering ways to facilitate support; and “urging” support from developed countries for LDCs and other developing countries.

The flexibility provided to Parties in the Paris Agreement is maintained, including in the choice of communication or document in which a Party may submit its adaptation communication. While the decision itself calls for ex-ante information, Parties may additionally choose to include ex-post information, such as information on progress, results achieved, and monitoring and evaluation.

It was agreed that the Adaptation Committee, in collaboration with the LDC Expert Group (LEG) and others, will develop and regularly update an inventory of relevant methodologies to assess adaptation needs related to action, finance, capacitybuilding, and technological support by June 2020. Following submissions by Parties and observer organisations by February 2020, the Adaptation Committee, with the IPCC, will prepare a technical paper on methodologies to assess adaptation needs and their application, related gaps, good practices, lessons learned and guidelines, for consideration and further guidance by the 57th session of the Subsidiary Body for Scientific and Technological Advice (SBSTA57) in November 2022. The Paris Committee on Capacity Building (PCCB) is also invited to facilitate access to, and implementation of, methodologies for assessing adaptation needs in the context of providing support for building adaptation capacity.

While some developing countries have pushed for greater recognition of their efforts to deal with the impacts of climate change for several years, a concrete way of doing so has proven elusive. At COP24, it was agreed that the synthesis report prepared by the secretariat for the global stocktake would include information on the adaptation efforts of developing countries (including an assessment of support needs for adaptation). The information will be drawn from “the most recent documents that may contain adaptation information”, which could include adaptation communications, NAPs, National Communications, NDCs, other reports prepared under the transparency framework, and reports of the IPCC and other relevant scientific bodies.

In view of greater coherence of institutional arrangements, it was agreed that the Adaptation Committee and the LEG will serve the Paris Agreement. Institutional arrangements related to finance, technology development and transfer, and capacity-building, are encouraged to strive for a balance between adaptation and mitigation. The Consultative Group of Experts and the LEG are invited to work together on training for assessing vulnerability and other aspects of adaptation. The Adaptation Committee is invited to continue making recommendations on ways to enhance collaboration, and promote coherence and synergies of adaptation-related institutions.

Role of the Adaptation Fund

While there was no specific outcome on loss and damage at Katowice, important advances were made on this issue: references to loss and damage have been included in the transparency mechanism and global stocktake. The rules for the transparency framework state that interested Parties may provide, as appropriate, information related to enhancing understanding, action and support, on a cooperative and facilitative basis, to avert, minimise and address loss and damage associated with climate change impacts. The global stocktake may take into account, as appropriate, efforts to avert, minimise and address climate-related loss and damage. These two additions came as a result of heavy lifting by small island developing States (SIDS) and LDCs, who argued that the inclusion of Article 8 (on loss and damage) in the Paris Agreement meant that the issue should be considered in the context of overall implementation of the Agreement, including in its review mechanisms.

adapted from an ECBI brief