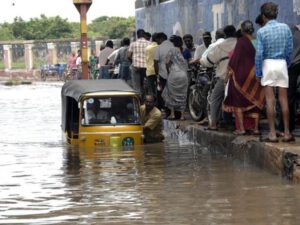 The CSC project aims to anchor climate-friendly solutions for urban infrastructure projects and area-based development in the planning and implementation of projects in Indian cities. A group of organisations: Delhi-based National Institute of Urban Affairs (NiUA) in India, Technical University of Berlin (TU Berlin) and Deutsches Institut für Urbanistik (DIFU) in Germany; support project implementation and the eventual upscaling of the partner cities’ experiences across other smart cities through innovative formats of knowledge exchange.

Climate Smart Cities Assessment Framework (CSCAF), being developed by NiUA’s C-Cube initiative, is a self-assessment tool framed with 28 indicators across 5 categories (Energy & Green Buildings; Urban Planning, Green Cover & Biodiversity; Waste Management; Mobility & Air Quality; and Water Management) to holistically assess a cities’ adaptation and mitigation efforts. It aims for cities to better focus their future planning and development in a climate-friendly trajectory. The officials from three Indian cities of Bhubaneshwar, Coimbatore and Kochi were tasked to apply the CSCAF of which stormwater management (SWM) is one aspect in the category of water management and sub-category of water stagnation risk management. 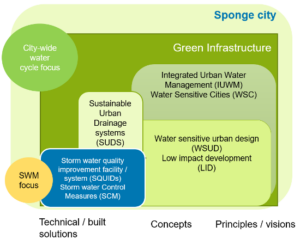 Dr. Sumetee Pahwa Gajjar presented a thematic session as part of a virtual training for city officials on SWM through Green Infrastructure (GI). She was supported by PlanAdapt’s Ana Polgar, working on the interface of Nature-based Solutions and Locally-led Adaptation, and guided by Kaj Fischer from DIfU. It was a wonderful opportunity to apply the thinking and learning on GI, through international examples of water sensitive urban design (WSUD), sponge city concept and social-ecological infrastructure, to inform current and future planning practice in India. Some international examples presented were the WSUD in Ho Chi Minh City in Vietnam and Transformative adaptation of rivers in Durban, South Africa. The overarching goal was to foreground the viability of GI and urban Ecosystem-based adaptation (EbA) more broadly as viable SWM strategies to be considered and incorporated. As climate change exacerbates flooding in urban areas, SWM strategies that are ecosystem-based offer numerous benefits including but not limited to pollution control, flood mitigation and climate-proofing.

The evolution of thinking around urban drainage can be seen in the transformation of terminology. What began as limited stormwater control measures using built solutions broadened to city-wide, water -cycle focused principles such as Integrated Urban Water Management and Low impact development, that can be collectively grouped together as GI. GI is a well-established concept rooted in spatial planning, although it emphasises greatly on developing a network of connected green and/or blue spaces that have a multifunctional quality. GI can manifest in multiple ways and forms, which can be adapted to even highly urbanised areas.

In this context, NbS offers a promising proposition. Being recognised as an umbrella concept (encompassing various ways to work with nature such as GI & EbA) that is most explicitly solution-oriented, NbS draws attention to the potential of nature in solving urban challenges that are complex and multi-faceted. It proffers a fundamental re-thinking of the human-nature relationship and is also a powerful metaphor that brings together different stakeholders who earlier lacked a common language to communicate with. NbS offers an intuitive concept that is broad enough to offer interpretive flexibility but also solid enough to be implemented and upscaled. The Urban Nature Navigator is a tool that can be used to assess the potential contributions of NbS to meet various urban sustainability challenges. This is not to promote NbS as a panacea for all urban challenges. Hence, it is crucial to recognise the need for the well-established frameworks of GI and urban EbA in enabling the systematic integration of NbS into urban planning policies

One NbS that is gaining popularity as a regenerative SWM practice is the implementation of recharge wells which is an age-old, traditional practice. The word traditional holds different meanings in different contexts. For example, more engineered solutions that qualify as traditional SWM in Germany are completely different from the nature-reliant SWM practices in India. For example, the highly urbanised and water-scarce city of Bangalore is digging recharge wells to replenish the shallow aquifers, from which groundwater is drawn for its daily use, through this traditional rainwater harvesting method. This nature-reliant practice goes beyond SWM and towards a more regenerative practice that replenishes the resources used by humans which are ultimately provided by nature and its healthy ecosystems.

The diverse international examples presented in the training highlight the multi-faceted benefits of incorporating GI in SWM practices. The need for galvanising of action towards mainstreaming NbS in SWM practice holds the potential for achieving the wider goals of urban sustainability. However, the links between GI, NbS and climate risks are not straight-forward. Therefore, as EbA has an established history of incorporating the impacts of climate change on the most vulnerable social groups, its emphasis on the social aspects needs to be retained when devising NbS for urban challenges such as SWM. PlanAdapt envisions the societal lens to be deeply embedded in the Climate Smart Cities project’s philosophy and practice. Our support towards the CSCAF training, was also a step in this direction.