The AWB initiative is all about understanding and managing climate risks better, with a particular focus on climate risks that ‘travel’ across borders. That can be political or geographical borders, or between sectors, as well as between ecosystems (e.g. river basins). Unfortunately, these connections and interdependencies are often hidden and not captured when climate risk assessments are conducted or adaptation plans are being made to cope with and overcome those risks. 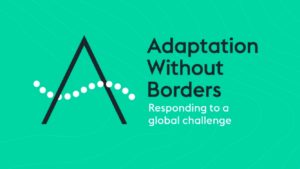 COVID-19 has revealed with startling clarity the vulnerabilities inherent in our global systems and supply chains – how impacts can leap from sector to sector and escalate from country to continent – with consequences that often hit the poorest and most vulnerable the hardest. Those effects are often referred to as cascading effects, also indirect or transboundary risks.

Climate Change is somehow similar. It creates effects (often damage or scarcity) from which no country can fully insulate itself and which will only become more acute with time. One country’s adaptation efforts could all too easily undermine another’s – redistributing vulnerability rather than reducing it – or miss opportunities to harness economies of scale and maximise the co-benefits shared adaptive action could bring. A transboundary perspective raises important questions about the inclusivity of adaptation and whether we are building global resilience to climate change that is truly resilience for all.

Such logic is often associated to greenhouse gas emissions, and the fact that the Earth’s atmosphere has no borders and hence, we are interconnected as a result. Emissions created somewhere, generate changes in weather patterns in other parts of the world. But this also applies to physical damages in one country, the effects of which travel via migration or supply chains to other parts of the world. These issues are often overlooked and insufficiently governed. By doing so, we risk increasing food and water insecurity, threatening trade and energy supplies, risking jobs and livelihoods, spurring social unrest and endangering our collective wellbeing.

The AWB brings together the research capacities and convening powers of globally-recognised experts from across four continents. The partnership is expanding – always welcoming new perspectives and capabilities from a range of regions, sectors and disciplines – including actors that are often absent from adaptation-focused networks, such as trade, finance and security experts. PlanAdapt has joined AWB as an official partner in January 2021. That underlines our strong commitment to enhanced management and governance of transboundary climate risks. It is also a continuation of the initial project and research work done on these kinds of risks by PlanAdapt, in particular on transboundary climate risks for the European economy as well as in view of water resource management in the Niger Basin.

Cascading Climate Impacts: a new factor in European policy-making. This policy brief sets out the main area of interest of the new CASCADES project (Cascading climate risks: Towards adaptive and resilient European societies).

Watch the adaptation blind spot – A Blog by Jamie Taylor