PlanAdapt > Latest News / Blog > Environment > Lost in translation – Japan and Germany among the top 3 most affected countries according to the Climate Risk Index 2020. Really?

Lost in translation – Japan and Germany among the top 3 most affected countries according to the Climate Risk Index 2020. Really, ahead of Haiti, Myanmar or similar countries in the Global South?…or…

The story about how difficult it is to communicate the consequences of climate change well? 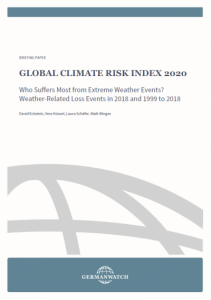 The recently published Climate Risk Index 2020 says that Japan and Germany are particularly at risk of negative consequences of climate change in comparison to many countries suffering from poverty, weakly developed infrastructure and public institutions, poor governance systems etc. in the Global South. Is this sending the right message to the wider public in rich and better-off countries (e.g. when presented during Germany’s prime time news broadcast ARD Tagesschau) and to their decision-makers in the private and public sector (e.g. during the climate summit, COP 25, in Madrid)? Or are those just the sober findings of a scientific piece of work?

Climate risk is admittedly a tricky and difficult term and is widely defined (e.g. GIZ and EURAC 2017) as the result of the interaction of vulnerability, exposure, and hazards or, in other words, the potential for specific, climate-related consequences (climate impacts) for something of value (= assets, people, ecosystem, culture, …).

The author and publisher of the Climate Risk Index, the German NGO Germanwatch, pursues generally the commendable cause to support countries in the Global South. They spend several pages in the report to meticulously explain the concrete nature of the calculations behind the index and almost provide a disclaimer for any interpretation of the index beyond its narrow meaning. However, the summaries of the report that are broadcasted in the media or on the web do convey the overall message that the rich parts of the world are as (or even more) vulnerable than the poorer parts. 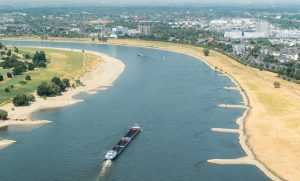 In line with this, I remember a plenary discussion of leaders in the financial sector during the European Climate Change Adaptation 2019 in Lisbon that highlighted the need to reduce the so-called disruption to markets and their key actors caused by (sometimes abrupt) transformational changes to the economy and society in order to adapt to climate change, including the potential need to divest in areas that are particularly vulnerable to negative physical impacts of climate change as part of today’s investors’ rationale – Disruption: “A break or interruption in the normal course or continuation of some activity or process,” as defined by Merriam-Webster. To many, the term carries a negative connotation. The upsetting of the status quo. A break from the normal. A distraction, at least. A deadly threat, at worst. – Depending on where you live in this world and your access to opportunities and wealth, ‘the normal course’ may understandably be something that you want to see broken. Particularly, if you are disadvantaged and left behind.

Consequently, these two examples show the dilemma of comparing losses and risks due to climate change between the more and the less developed parts of the world. Are the rich and their valuable physical assets, infrastructure etc. actually more vulnerable to climate change due to the considerable economic losses if a weather-related disaster hits? And the poor less vulnerable, because they suffer from statistically lower economic loss as the value of their assets is much lower? In cases where this argument prevails, the assessment of risks of negative consequences due to climate change may be drastically distorted. Is such a view a reflection of questionable value systems or even more pronounced, is this a sign of a neocolonial world view?

Whatever view one may have on this, these cases certainly demonstrate that communication of what needs to be done in view of being prepared, developing adaptive capacity or planning and implementing adaptation measures require a thorough reflection of concepts and arguments behind the assessment of what is at stake (or at risk). An index, for instance, is not an objective scientific assessment as it may seem to many, but rather a communication tool that needs to be embedded in clear and well-designed narratives. Effective, economically-just and socially-inclusive adaptation to climate change will depend on communication that conveys the values of the 21st century.