PlanAdapt > Latest News / Blog > Adaptation Decision-Making > NAP Expo 2019 – What’s the Latest on (National) Adaptation Planning? Is the Glass Half Full or Half Empty When It Comes to the Efforts to Get the World Ready to Adapt to the Impacts of Climate Change?

NAP Expo 2019 – What’s the Latest on (National) Adaptation Planning? Is the Glass Half Full or Half Empty When It Comes to the Efforts to Get the World Ready to Adapt to the Impacts of Climate Change? 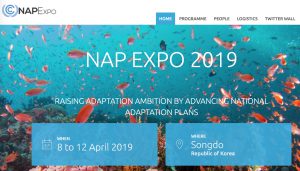 The international community on adaptation planning met last week in Songdo, South Korea, to exchange experiences and foster partnerships between a wide range of actors and stakeholders with the goal to advance National Adaptation Plans (NAPs). The NAP Expo 2019 was organised jointly and simultaneously with the Korea Global Adaptation Week.

Some other new approaches, although much fewer than the purely analytical tools and datasets, try to link analysis better to the identification and appraisal of suitable adaptation options:

The majority of these tools though have an overemphasis on climate hazards, impacts or asset damage, while the (quantitative) assessment of vulnerability and adaptive capacity remains limited.

Even fewer approaches were presented that use pronounced collaborative and participatory processes in addition to the more quantitative analysis:

What About the Implementation of Adaptation Action? Has it Been Successful So Far?

Despite a few examples of practical implementation of adaptation solutions (e.g. the Porous City Network (PCN) from Bangkok), there is a recognition that the adaptation process is somehow slow in turning all the analyses, assessments and the awareness into action.

In the absence of clear and agreed measurement frameworks for adaptation action, it is hard to say whether the efforts are well on track or not. However, there are signs that are worrying.

For instance, a stocktake of the national adaptation planning by the UNFCCC secretariat reveals that the NAP process has not yet moved countries towards implementation of adaptation action (e.g. 0 LDC and 0 non-LDC countries have reported on ‘implementation and managing actions in NAPs’ – see grey area of the diagram). That 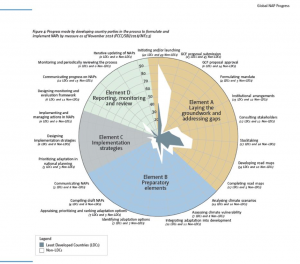 must be a warning sign for all actors involved. The NAP process was launched in 2010 at COP16 in Cancun, Mexico, and has in 8 years apparently not created the anticipated boost towards adaptation action. There may be obvious and known difficulties to account for adaptation action and there are certainly considerable investments in adaptation (GCF, Adaptation Fund, GEF LDC Fund etc.) that have not been accounted for under the NAP umbrella, but the overall trend is clear and certainly worth questioning.

Is the Adaptation Community Moving at the Right Pace and in the Right Direction?

While the majority of public attention and political discussions are deservedly focused on mitigating ‘more’ climate change and probably semantically more correct, a more severe climate crisis in the future, the attention on adaptation is still limited. In analogy to that, adaptation has, for example, recently been called ‘the poor cousin of climate change policy’ in this article by the Guardian newspaper.

After all, successful mitigation is still the most effective adaptation measure! But in the meantime, tens and hundreds of millions of people around the world (mostly the poor) have already, are and will suffer from increased negative direct and indirect climate change impacts such as floods, droughts, extreme temperatures etc.

How adaptation is positioned as a policy objective is worth considering here. Political gravity and resonance are hard to measure, but careful analysis of the ‘position’ of adaptation in the broad agenda-setting landscape is vital. Ever more efforts are made to integrate climate risks and adaptation with other agendas (SDGs, land degradation and UNCCD; mainstreaming into other sectors such as health, agriculture, forestry, fisheries, human settlements and water). Some agendas, such as the disaster risk reduction and the resilience one, are closely interlinked with the CCA agenda. It is certainly hard to say whether this bundles energy and efforts and they are mutually enhancing or whether there is friction and potential of loss energy and efforts through competing asks, for instance for funds, and slightly undermining dynamics. However, this should be carefully observed in the coming years and all efforts need to be made to reach out and join hands to bundle strengths.

Are there Invisible Elephants in the Room?

While the NAP Expo 2019 is obviously not the only measure to understand where the adaptation debate is at, it provides, however, a good overview of the situation of the ‘community’. There is undoubtedly progress in the area of adaptation, but it remains a concern that the larger part of the discussions is still focused on preparation, analysis and planning. And relatively little is being reported on lesson learnt based on implementation and experiences, and how those can be used to improve further action.

This leads to some tough questions that still seem, at least partially, unanswered by the exchanges and consultations at the NAP Expo 2019:

Do you have answers to these questions or diverging views, please share them with us!